I said I’d have more to say…

So here are some ways Clan Lord pretty well forces people to cooperate:

I’ll have even more to add later!  Until then, here is another picture… 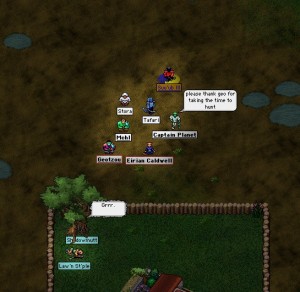 One of the other experienced players reminds younger ones (Eirian and Mchl) to thank a high-ranked fighter (Geotzou) for taking us hunting.