Clan Lord differs from other MMOs in many ways; one of the most basic is longevity.  The game has been running since it was released in 1999 And there are a number of players who have participated since the beginning.  This longevity suggests that there must be some unique features, and there are — but I’ll get to those later.  😉 The presence of players who have participated for so long in a game in which there are no caps to the level (ie player strength) has some interesting consequences.

One is the challenge created for game designers trying to add new content, especially in the form of an event like an invasion or monster attack.  If there are several extremely advanced and powerful fighters and healers, it is very difficult to create an event or creature that will challenge those players, yet not slaughter the lower level players. Apparently this is referred to as the “Mujin” problem, named after a particular player (or collective) that has played so assiduously for so many years, that they far exceed much of the other population. (There are of course other high level players who cause this trouble as well, but the problem is named after an extreme case).

However, I think one of the most important effects of having so many players who have played for years and become powerful is that these players start to become part of the story of the game. Sometimes this happens through explicit roleplaying.  For example, one player who goes by the name Stinkfist styles himself a pirate captain and works to organize adventures involving himself and other pirates fighting against a particular group of enemies (the Darshak) in the game.  In addition to organizing raids against these foes, Stinkfist is working on building some kind of embassy and its completion depends on the success of his raids.

Interestingly, this player has gain the help of at least one Game Master (GM) so that Darshak that attack may demand to know his whereabouts and declare there is a bounty on his head.  At different times, one player or another has been elected President of the Fen’neko race; other players gain extra experience for helping the Fen president.  These are examples of players being deliberately incorporated into the game and in a sense saves GMs work; rather than creating a non-player character to drive a quest, they instead rely on players themselves to supply the AI.

Another way players become part of the story is simply through reputation. For example, if you need armor made, see Eomer, who trained as a blacksmith.  If you are fond of spiders, keep an eye out for Gremlins, who can transform into numerous varieties, and can also befriend them, and prevent them from attacking.  If you want to learn about using the Kudzu plant in battle, speak to Geotzou, who has made a lengthy study of their strategic use. Connie Crete is known for many things, from excellent knowledge of geography to her fishing skill. D’Ead is rapidly becoming known for her love of zombie costumes, Creed for her fondness for ponies, and Natas for his fondness for chains. 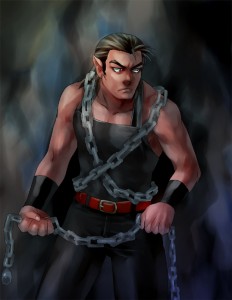 Chains are used to rescue fallen players by dragging them somewhere to be healed.

In general, many players are simply known for their strength, leadership, or other characteristics (both positive and negative).  They become subjects of discussion, advice to new players, and their doings are reported outside the game by a “media network” created by players to report happenings in the game.  Some even become the subject of parody. So in essence, the adventures and interactions of the players become the real story, growing out of the story provided in the game, but far richer.  And, because even those who don’t role play express some kind of personality, they can’t help but become characters.

In this way, the game story escapes the bounds of the game itself and of the control of designers.

Next up, more on inhabiting characters.